Enthusiasts of metaphysical jewelry and Egyptian mythology alike, have for a long time enjoyed wearing Sekhmet Pendants. If you are a collector of Amulet Jewelry or like wearing something beautiful and symbolically meaningful, a Sekhmet Pendant should be part of your collection. Many different interpretations of the ancient Egyptian goddess are available in pendants and necklaces for men and women.

What does the Sekhmet Pendant symbolize?

In Egyptian religion, Sekhmet, also spelled Sakhmet, is the goddess of war and the destroyer of the enemies of the sun god Ra (Re). It’s mysterious association with both disease and healing, replicates the ancient dualism Chinese philosophy of Yin and Yang ☯.

The obviously opposite forces dwelling in Sekhmet’s being, disease and healing, are a symbol of our complementary, interconnected and interdependent natural world. Both concepts give rise to each other as they interrelate to one another.

Indeed, a Sekhmet pendant makes the perfect conversation starter, and its meaning makes it an even more attractive and meaningful piece of jewelry. Similar to the Tree of Life Necklace, which symbolizes, among others, power and wisdom, the Sekhmet Pendant, is a spiritual jewelry that is believed to evoke energies and provide healing powers.

The ancient Egyptian god Sekhmet was worshiped 3500 years ago, primarily in Memphis (South modern Cairo). It was depicted as a fierce goddess in the Egyptian pantheon, portrayed as a woman with the head of a lioness, on which was placed the solar disk and the uraeus serpent. 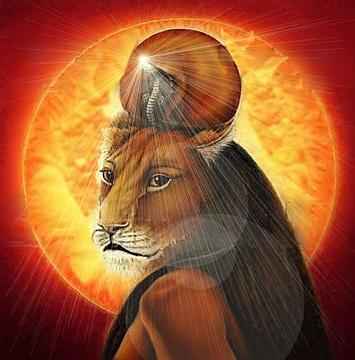 The Ancient Egyptian believed that Sekhmet was created by the god Ra to seek vengeance on the people of Upper Egypt. According to the legends, Sekhmet unleashed her wrath on men and women with arrows of fire and breath as hot as the sun.

When those who wronged Ra ceased to exist, the god Ra tricked Sekhmet into ending her reign of terror. The vengeful side of Sekhmet was so powerful that Ra had to subdue her but at the same time horor her obedience to him. He ordered the royal court and the priests of the Temple of the Sun to make beer mixed with red ochre.

This mixture was then spread like pools of blood all over the land. Sekhmet went on the hunt and drank the pools of ochre and beer, mistaking it for the blood from her prey. The magical beer and ochre mixture dreaded the powers of Sekhmet.

It is said that Ra then prayed on her helpless state and magically awoke a peaceful nature in Sekhmet.

That day, as the legends say, Hathor was born. The goddess of love, beauty, and music, got acquired by Sekhmet as her dual state, becoming thereafter associated with healing, medicinal arts, and feminine wisdom. Hathor’s healing powers were so powerful that gave birth to Nefertem, the healing god.

Following the legends and a philosophical route, the Sekhmet Pendant makes a powerful symbolic appeal to many. Sekhmet pendant jewelry represents the following:

As aforementioned, the ancient Egyptian god Sekhmet, daughter of the sun god Ra, and predecessor of the healing god Nefertem, was depicted as a fierce woman with the head of a lioness. Her lioness head was adorned with a solar disk and uraeus.

The solar disk/ sun disk (called Aten), in the Egyptian pantheon, is a deity amulet that represented the powers of son god Ra, and was used to adorn temples or only seen worn by a few members of the royal families or sun gods themselves.

The Uraeus (from Egyptian, rearing cobra), worn by Sekhmet, and usually found in many Sekhmet pendants – is a symbol of royalty, sovereignty, deity, and divine authority in ancient Egypt.

With this portrait of Sekhmet in mind, the most common Sekhmet pendant types include the following designs:

The History of Sekhmet Pendants

The first jewelry pieces were crafted from bone, animal skin, and seashells. Ages later, empowered by advancement in technology and access to gemstones and precious metals, ancient Egypt paved the way to manufacturing fine jewelry and creating lasting trends.

Jewelry was worn by women and men, of all social classes. In the case of Sekhmet pendants, these particular ancient Egyptian jewelry, was considered an amulet of protection. It could be worn as an independent piece, or fused into other jewelry. The deity amulets were seen as equally protectors of the living and the dead.

Another rare ancient Sekhmet pendant dating back in the 7th – 5th century B.C. is available for purchase online from E-Tiquities. The seated blue amulet of Sekhmet, with a height of 3.6 cm (1.4 inch) is made of faience and glass. It is surrounded with 30 decorative beads, interspersed with gold colored glass beads. The pendant is in excellent condition, with no breaks or repairs, although around 2700 years have passed since it was first created.

The ancient Sekhmet necklace originally belonged to an American private collection, accumulated between 1901 and 1907 by Mr. and Ms. Du Bois. The couple was intrigued by the mysterious history of ancient civilisations, and collecting precious antique jewelry was part of their hobbies.

Throughout the years, the pendant holding immense historical value has been exhibited in some of the most reputable and popular museums in the US, including here The Metropolitan Museum of Art (New York 1922-1945); Museum of Fine Arts (Boston 1945-1967); and Museum of Man (San Diego 1968).

The rare Sekhmet necklace can be purchased online and comes with a whopping $25.000 price tag.

The 2500 years old Sekhmet Pendant found in an archaeological site in Egypt belongs to the 26th Egyptian dynasty, and is estimated to have been crafted in the years between 570 – 526 BCE. The amulet presents the goddess Sekhmet standing, with her hands at her sides, while wearing an Egyptian headdress with the solar disk and uraeus.

The pendant is accompanied by a beautiful string of 30 gold cowrie, shell-shaped beds, with two large barrel-shaped beads (one in gold and one in chalcedony) and one gold pomegranate shaped bead with granulation. The Old Sekhmet Pendant is part of Penn Museum Collection (Philadelphia), and it is open to the general public from Tuesday through Sunday, from 10:00 AM to 5:00 PM.

An ancient Sekhmet amulet dating back between years 654 and 525 B.C. was recently sold in an online auction organized by Fernando Gallego. The highly exclusive Sekhmet pendant was made out of green faience, a hard ceramic extracted from molten sand, which was usually used in ancient Egypt for the making of fine jewelry. The Sekhmet amulet jewelry, dating back 2300 years, measures 5.6cm (2.2 inch) in height, and 1.2cm (0.5 inch) in width. It was stored in perfect condition in the archeological site where it was found, with the only damage being a broken ear. The jewelers at Fernando Gallego remodeled the ear in gold and also designed and handcrafted an 18k gold setting, for the Sekhmet amulet to be protected and embellished. The setting transforms the amulet into a unique, one-of-a-kind necklace, suitable for men and women.

As aforementioned, there are several types of Sekhmet pendants and the lioness face is one of them. The images show a pale turquoise faience pendant with the form of a lioness. The amulet is strung in a necklace with ancient banded agate barrel beads, interspersed with modern 14k gold beads and ancient round stone beads. Again we see the usage of the blue color. For ancient Egyptians, it was associated with water, rebirth, and strong regenerative powers. This genuine Sekhmet necklace is an amazing example of craftsmanship that stands on Egyptian artistry. It was available for purchase from Live Auctioneers in 2016 and the estimated starting price was $1800 up to $2500.

To sum up, a Sekhmet pendant makes the perfect jewelry for the ones who appreciate metaphysical pieces and Egyptian mythology alike. If you like amulet objects, a Sekhmet pendant, in a mythological context, provides healing and protective powers, symbolises feminine wisdom and power, in addition to its appealing and amazing aesthetics.

5 Ways to Wear Sneakers with Your Suit

5 Pretty Jewelry Gift Ideas for Her

Harnessing the Sun with the Best Solar Powered Watches of 2022

Everything You Need to Know About the ‘Playground Highlights’ Trend 

The Best Men’s Watches to Give as Gifts This Christmas

7 Ways to Make an Elopement Magical

5 Ways to Wear Sneakers with Your Suit

Hi, Impact. Choosing the right product for you and your situation can be tough. At LuxyWish you can find gadget reviews, buying guides for watches, news & discussion. LuxyWish is a participant in the Amazon Services LLC Associates Program. As an Amazon Associate, we earn from qualifying purchases. We also participates in other affiliate programs and we may earn a referral commission if you purchase through links on this website.